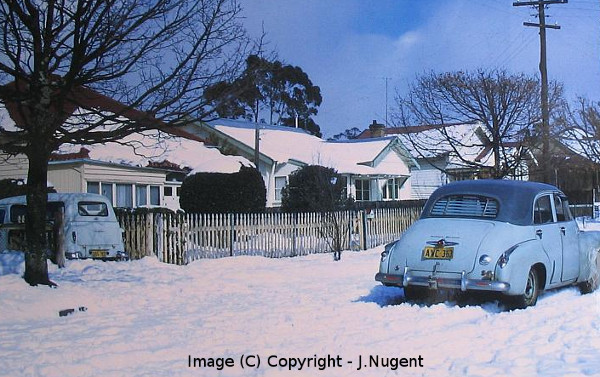 A little snow across the Oberon Plateau (mostly above 1200M) on the night of the 21st and also into the early hours of the 22nd. No settling to my knowledge. Blackheath had some wintry precipitation that was reported as sleet around midnight and into the early hours. A very windy morning on Tuesday, with 'wind-chill' temperatures reaching close to -10C. Nothing notably cold in the sounding for Sydney.

There were some lovely snow showers across the Oberon Plateau during the morning and a few more occured throughout the day. Even a little settling was observed at Porters Retreat. A few showers of hail and melting graupel occured in the Blue Mountains and perhaps some snow at Dargan and Clarence. I've seen the video and whilst there were certainly flakes, there also appeared to be rain in the video too. That is generally regarded as sleet, in Australia. I'm not discounting the snowfalls, where they occured, sometimes it's just a little tricky to define a genuine snowfall.

Some lovely snow showers across the Oberon Plateau on the morning of the 2nd of November. Most of that snow activity was above 1200M although snow showers did occur lower down. Snow settled in the range of 1cm to 3cm above 1200M on the Oberon Plateau and snow showers and flurries occured in the Blue Mountains, mostly above 1050M - with no settling. -29C at the 500hPa level, -8C at 700hPa and -1C at 850hPa, were the weather balloon sounding recordings from Sydney.

Well, just when we were about to say goodbye to winter 2022, with very little snow to speak of, winter said hello, emphatically. What a good system that was. On Tuesday the 23rd we had a gradual movement into colder conditions, after a fairly mild start to the day. Not unusual, in pre-frontal conditions. It was 8C at sunrise on Tuesday and around 1C at sunset with persistent sleet. It took a long time to transition from snow as the precipitation was never more than light and continual. At 2pm on Tuesday, it was 5.7C and then gradually over the next three hours it slowly dropped to 0C by 7pm, reacing -0.5C at 9:30pm as the snow began to fade. Then the wind and rain moved away with the low, into the Tasman. 7cm of snow in Blackheath, was the gift by 5am Wednesday morning. Even Lawson had some flurries, as the lower level temperature was quite cold, around 0C or colder at 900hPa. I will add more to this report as time permits.

More sleet and snow showers across the Oberon Plateau and the Blue Mountains, across these three days. Blackheath had sleet and a few wet snow showers before day break but nothing settled and the Oberon Plateau also had nice snow shower that left up to a few cm of settling above 1200M. Then a similar situation on Tuesday left a cm or two more of settling above 1200M on the OP and also snow showers for the Blue Mountains, mostly above 1000M with no settling of note in the BMs. On Wednesday the 8th, we had snow grains in Blackheath that settled lightly with some black ice, too. No doubt the Oberon Plateau would have had some settled snow at this time. Again, this wasn't a potent air mass with strong cold in the mid to upper levels although the lower levels at 850hPa and 900hPa remained quite cold, especially on the Oberon Plateau. This cold has resulted in the coldest start to winter in more than thirty years in the Blue Mountains and also Sydney. So, why have we had such a cold start, even though we have not had a lot of snow? Lack of strong mid to upper level cold and also lack of moisture in higher levels via troughs and coastal lows, would be my initial answer to that.

This system wasn't overly powerful in a cold air context although it did pack punch with 'Bomb Cyclones' in the Tasman and strong winds, too. The Oberon Platea saw a light settling on the 31st with maybe a few cm abover 1200M and overnight more fell, to leave around 4cm to 6cm above 1200M from my observations. This amount may have varied across the OP as snow showers simply frozen shower activity and varies in intensity from place to place. Oberon township had around 2cm of settling by the 1st of June and snow showers persisted throughout the day. The Blue Mountains had some snow showers in the afternoon of the 1st, sleet and snow ebbed and flowed for less than half an hour, around 4pm

The upper temperatures were very modest at 700hPa and 500hPa and were nothing to write home about although it was persistently cold at the 850hPa level, which allowed the mostly light snow to persist for a couple of days or more.