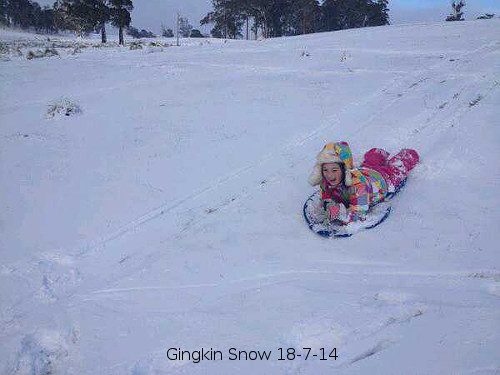 Due to the changing climate in recent decades, the Blue Mountains gets less snow than it used to. Blackheath is usually the best town to see snow, if the Blue Mountains is experiencing a fall (we still see snow showers at least three to four times a year) but the Oberon Plateau will usually provide more snow during a cold outbreak.

It isn't always easy finding snow when the conditions are marginal, that is, the air is barely cold enough and/or there isn't much moisture around. As you may know, the Oberon Plateau region is a reliable place for snow in this situation - if snow is in the forecast or has indeed fallen recently. It is somewhat higher than most areas of the Central Tablelands and the highest points are also easily accessible by car. Added to this, the much lower ground surrounding this region to the west, acts as a good precipitation trigger. Even fairly dry air over the lower ground to the west can form cloud if forced over the ranges, which can lead to rain, mist or snow. And if we have the less common, cold south easterly wind setup, the highest areas out this way can sometimes be the only spots that will produce snow as places like the Blue Mountains usually only see cold rain or sleet on these days.

The easiest place to find snow in the conditions mentioned above is Mount Trickett. View the Map links above to locate this place. At 1362 metres above sea level, it can be a real snow magnet. The only problem is that the shortest way of reaching it is by descending into Jenolan Caves and driving up the other side, a rather steep and windy approach. If you don't mind very narrow roads, steep cliffs and the odd kangaroo, this is certainly the quickest and most direct route and can be done by conventional car. However, if you can't maintain good traction heading into Jenolan Caves, there is little chance you will make it up the other side to Mt Trickett! The other way is to head into Oberon from the turn-off at Mount Bindo (just south of Hampton) and then take the road to Edith and Jenolan Caves from Oberon itself. This way is longer but quite level and safe. You can also take the Edith turnoff just before you arrive in Oberon to save a few kilometres but I like to head into Oberon for potential snow photos.

So, how about some more specific directions? Okay. If you are coming from Sydney, drive down Mt Victoria pass and after several kilometres you will reach the historical village of Hartley on your left. Watch out for the permanent speed camera. Just after that, at the bottom of the hill, take the Oberon turn-off on your left and drive through Lowther, Good Forest and then Hampton. Not long after Hampton, you will come to a T-intersection and a reserve on the right full of pine trees. This is the base of Mount Bindo at around 1000 metres (Its possible to take the gravel road to the top of this mountain - 1363 metres - but I wouldn't recommend it unless you are in a 4WD). At the intersection, turn right to Oberon or for Jenolan Caves continue straight ahead. Remember, the Jenolan Caves road is the steep way to Mt Trickett, the Oberon road is much easier but longer. In heavier snow conditions or indeed iced over roads, there really is no option but to turn right and head into Oberon. Then again, in such a situation, you may not make it to Mount Trickett anyway!

I take the Jenolan Caves road when I can, for convenience. The road here briefly reaches 1200 metres in places so don't be surprised if snow starts to fall or is on the ground here. Drive carefully, I've had plenty of sways and slides here on icy roads. Eventually, you will descend into Jenolan Caves. Take it easy, the road is very narrow and steep and busy with tourists on weekends. Once you drive through the Archway at Jenolan Caves, Mt Trickett is exactly 6.3 kilometres from there on the right. You have to drive out of the gorge/valley of Jenoland Caves to reach it. There is a non-descript gravel/dirt turnoff that leads you to a brick building with a sign that says, "Navigational Facility". Adjacent to that is a high tower. That's Mount Trickett. If you continue on past Mount Trickett, the road will take you to Oberon. There is also a turn off near Edith that will take you to the tiny settlement of Shooters Hill. This town is over 1200 metres asl and there is also a transmission tower there that can be accessed via a gravel road just out of town. This high hill is around 1354 metres above sea level and you will often find snow chasers gathering here in winter. This is another good spot for snow but the wind and snow can rip through you like mad up there. Is there a colder place to visit on the Central Ranges during a cold outbreak? And take note, if heavy snow falls, its a fair way back to the safer, lower lying areas from here.

By the way, you can see Mounts Bindo and Trickett from Mount Boyce lookout, just north of Blackheath. Its on the left, opposite the garden centre. Mount Bindo is the distinct rounder looking feature immediately west and Trickett is the flatter high formation to the left of Mt Bindo. Checking from this lookout can indicate the snow situation, ie: if there is low cloud over the ranges.

Authors note: The Oberon Plateau snow region can be dangerous for driving. Overnight and daytime freezes can produce black ice or other tricky driving conditions. Accidents or close calls are quite common in winter, quite often involving those visiting the area that are unaccustomed to ice and snow. Enter this environment at your own risk, especially if you have little or no experience in such conditions. Its not always a matter of 'if' you will lose control of your car, its a matter of how fast your are going when you do. Local police get annoyed with folk driving into the area unprepared. Always check the warnings and forecasts for the region, not to mention the road closures. Local council rangers have told me car insurance is void when roads are closed.